Historically August has been viewed as a low period for the garden, due in part, I think, to owners of large estates traditionally moving to Scotland for the grouse season, today it is the main holiday season for everyone with school children. (Except for this year). High temperatures such as the ones we experienced early in the month this year can spell the end of some plants, such as my Sweetpeas.

It does not have to be so. There are a wide choice of plants to fill the borders in August, Phlox, Japanese anemone, roses, if you have deadheaded, dahlias, late sown annuals, pot plants such as pelargoniums, asters are just beginning to flower complimenting ornamental grasses for the late summer look.

The video is of Our Garden@19 filmed towards the end of the month and following the heavy rain and winds. Please select full screen and turn on your sound.

What has survived the August weather in your garden?

Choosing my Top Ten flowers in Our garden@19 is difficult at any time of year, however one for October has to be the Michaelmas Daisy. (Aster/ Symphyotrichum.)

This white one appeared in the garden two years ago. I think it may have come in with another plant. It is a runner (ie.invasive) by the appearance of its roots, I was unsure whether to keep it, until it flowers then, when it does, I relent. 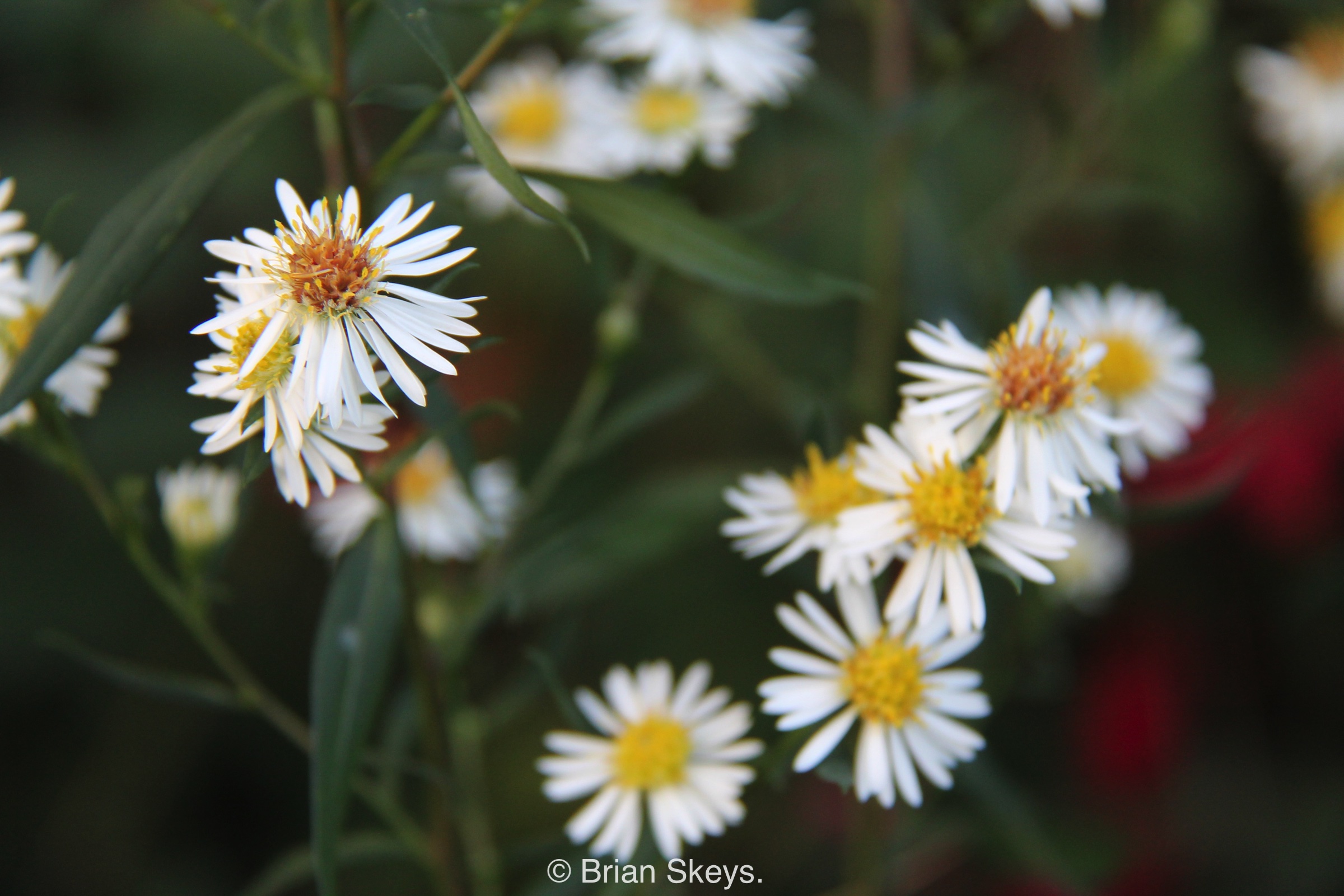 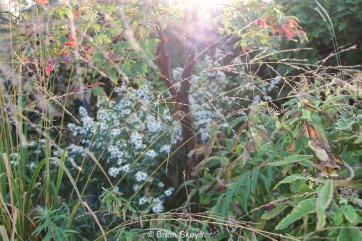 I like the way it blends in beautifully with number two, the Acer griseum, ( I know its not a flower, I hope Chloris approves*, See below) with its peeling cinnamon like bark…

…along with the Molina ‘Karl Foerster’. The Grasses make a lovely contribution to the October garden, therefore they are my number three.

Helianthus ‘Lemon Queen’ has been a feature in this garden ever since I first saw it in Bob Brown’s, Cotswold Flowers, display beds. It stands at the back of the border, stiff and upright without the need for support.

…along with a late planted Sweet Pea that has decided to climb up the Taxus bac. Fastigiata.

Sedum do not seem to do very well in Our Garden@19 so this one is very welcome.

The Crab Apple ‘Golden Hornet’ is in its second period of glory*, blossom being the first. it is growing alongside the raised bed containing ‘THE’ Dahlia for me ‘David Howard’. 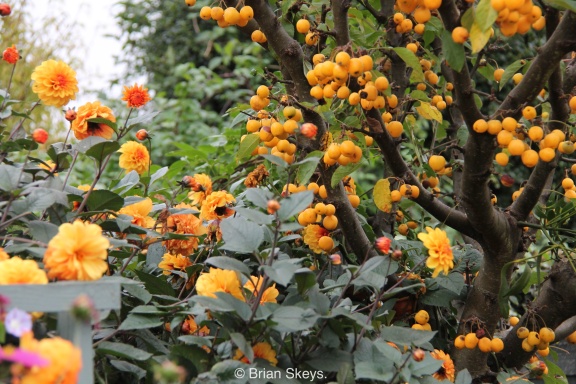 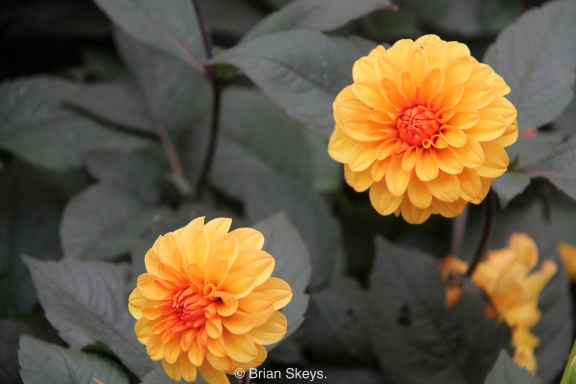 …you can stroll to the banana bench and sit, to take in all the autumn colours in Our Garden@19.

I am joining in with Chloris * and other bloggers posting our Top Ten for October. Please visit them using the link to see their selection.

Growing  Dahlias has become popular again within the last 15 years or so, some credit the late Christopher Lloyd at Great Dixter with their revival.

I grew up next door to my maternal grand parents and there was a large garden producing almost all of our food. A vegetable garden and orchard with chickens, pigs and bees kept my grandparents and parents busy, we were ‘encouraged’ to help with the weeding along with having our own little plot.

Besides growing food for the table my grandparents used to show an array of produce in all the local shows. Their pride and joy was the Dahlia cutting bed (how ‘today’ was that!) providing both flowers to sell and for show.

This picture below shows them standing among the Dahlias with one of their prize winning cups.

From the beginning I have grown Dahlia’s here in Our Garden@19, partly due to nostalgia, partly inspiration from visiting Great Dixter and reading Christopher Lloyd’s books.

I use them in a simple rotation, in the raised beds edging the patio and following on in the space, occupied by Tulips, Wallflowers and Forget-me-Nots. I lift and store the Tulips in the greenhouse during the summer when the Dahlias are ready to go into the garden. The bulbs worth keeping, along with any new ones, are planted in November after lifting the Dahlias to store in the green house.

The Dahlias below are the ones in the garden this year. One new one is ‘Mexican Star’, a hybrid between Chocolate Cosmos and a Dahlia. It is darker in colour than the photograph and is reputed to smell of chocolate, I can confirm it does.                                   I wrote about purchasing the tubers at  Chocolates and Flowers

The raised beds are also planted with other tender annuals such as Tagetes patula. I purchased the original seed from Great Dixter, it is their own strain selected for height and will grow to between 3 to 4ft… 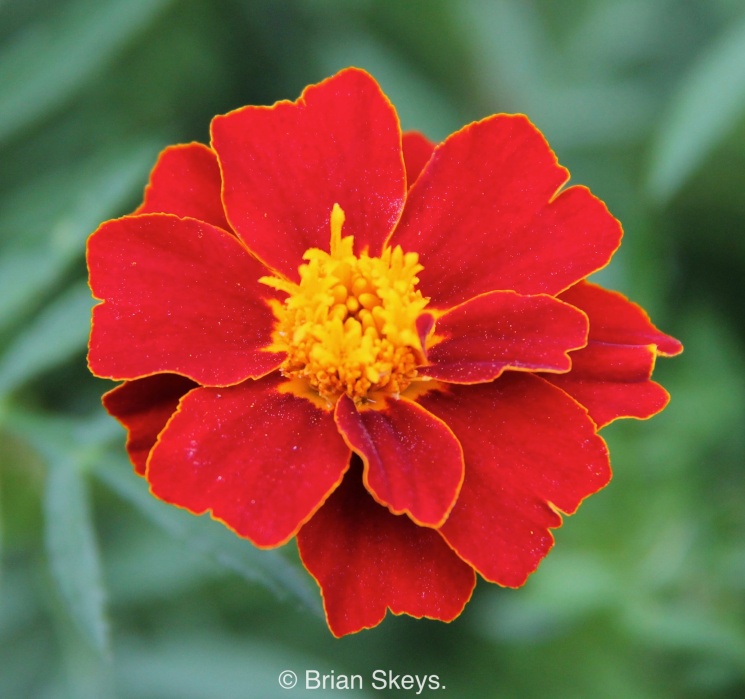 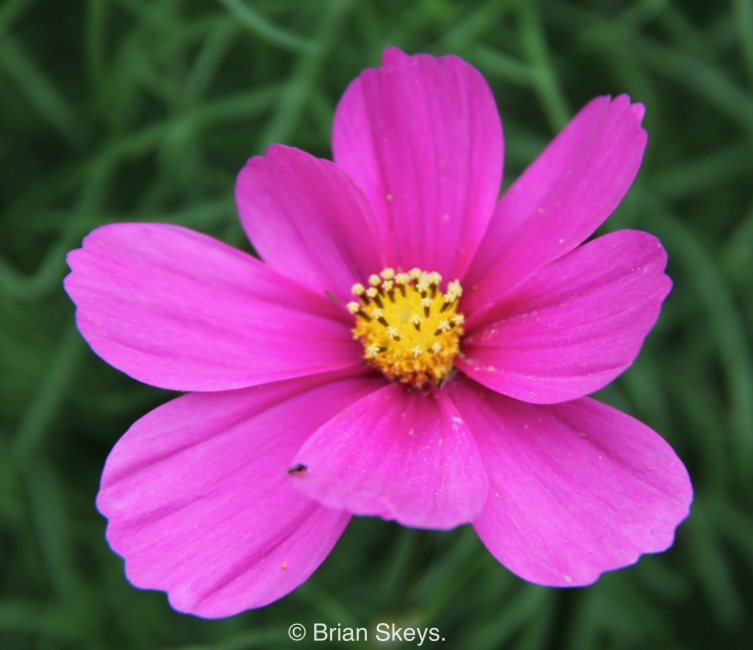 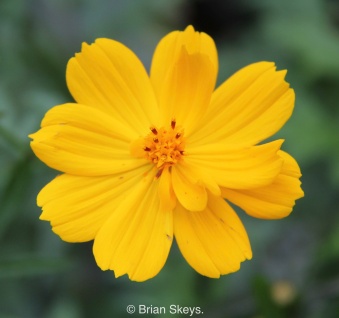 All of the above have been grown from own saved seed, the yellow Cosmos seed originally came from Amelia

I have copied below an updated version of a Dahlia Fact Sheet I produced for the Black Pear Gardening Club website. I hope you find it interesting and perhaps useful.

There is a Tree Dahlia that flowers at Christmas.

Dahlias can be grown from own saved seed, but they don’t come true to type.

Cuttings can be taken in the spring when growth starts. You need to cut a small amount of tuber with each shoot, you can apply rooting hormone, pot up and keep in a propagator or put poly bag over pot. You may need to spray mist in the first few days.
When there are signs of growth, pot on to individual pots when needed.
Remove central stem from cuttings to produce more stems.
If you have a big tuber you can divide it. Wait until you can see new growth and then cut into sections with at least one shoot. Dress any cuts with yellow sulphur dust and then pot up.

Lift after frost has blackened tops, cut off tops, shake most of the soil off and place in frost free environment upside down to dry. Dust tubers with yellow sulphur powder, especially on any damaged tubers, before putting in boxes of compost right way up with the stems just showing.

I store in boxes lined with newspaper in a mix of cheap compost and vermiculite (approx 10:1). A cheap form of insulation is polystyrene tiles placed under and around the boxes.
In very cold weather you can also throw over horticultural fleece but don’t use bubble wrap over the top, as this does not allow any air into the box and the tubers could rot. Bubble wrap is ideal for lining greenhouses to provide extra insulation in winter. Check during the winter and if the compost becomes too dry, give a light watering on a frost free day. Also remove the fleece to allow fresh air to circulate or mould can develop.

Around mid March start to apply some water to encourage growth.

In April I put the tubers into big pots with good compost to give them a good start before
moving them outside on sunny days to harden off before planting out in late May – June. They are well grown by the time they are planted into the garden, which helps to  reduce slug damage.
If you have free draining soil and wish to leave in the ground cut back after the first frost and provide an insulating mulch of compost or bark. You will need to apply slug protection early in the spring.

Earwigs – only a problem if growing for show. My Grandfather use to put inverted flower pots stuffed with folded newspaper on canes by each Dahlia he would then shake the earwigs out into a bucket and feed to the chickens! If you want to use as cut flowers, cut the Dahlia flower, hold upside down and shake vigorously to dislodge insects before taking inside the house.

Slugs – use any method that you find works. I use organic slug/snail pellets and nematodes in the garden. (Nematodes don’t work against snails).

Dahlias are heavy feeders; good garden compost or old farm yard manure can be incorporated into the planting hole along with a high potash fertiliser, Vitax Q4, a Rose fertiliser or for organic gardeners Blood, Fish and Bone. A second application will be needed later in the growing season to keep them flowering. If grown in pots use a slow release fertiliser and some water retaining gel.

Except for dwarf varieties, Dahlias will need staking. The Great Dixter method, for individual plants, is to tie a piece of string to a stake and then loop the string around each of the main stems and tie back to the stake. This prevents that bunched up look you see when string is tied around the whole plant and allows each stem some individual movement.

Dead head during the flowering period and you will have a good display all summer.

Over time Dahlias have come and gone, here in Our Garden@19, the one constant presence is my favourite ‘David Howard’. It is a robust Dahlia, producing large tubers from which to propagate.

I realise orange is not to every ones taste in a flower, I recently read it described as ‘Butterscotch’, however I think along with its dark foliage it has the ‘Wow’ factor.

Not quite up to Grandparents standard, third prize in our village show.              (Apparently the stems are too short).

Do you grow Dahlias and have a favourite one?

Star of the month is this, name unknown, Phlox which also features in the picture above, it came from my Great Aunt’s garden, and has been flowering for weeks.

Next also in the picture above is this Dahlia, again name unknown, given to me by a client several years ago who didn’t like the colour.

Veronicastrum Fascination stands tall at the back of the border and as you can see is also loved by the bees.

Digitalis lutea is a perennial foxglove, easily grown from seed.

I often leave envious comments on blogs showing wonderful stands of Crocosmia ‘Lucifer’, I have been trying to get it to flower here for some time. Is this the start of something big? 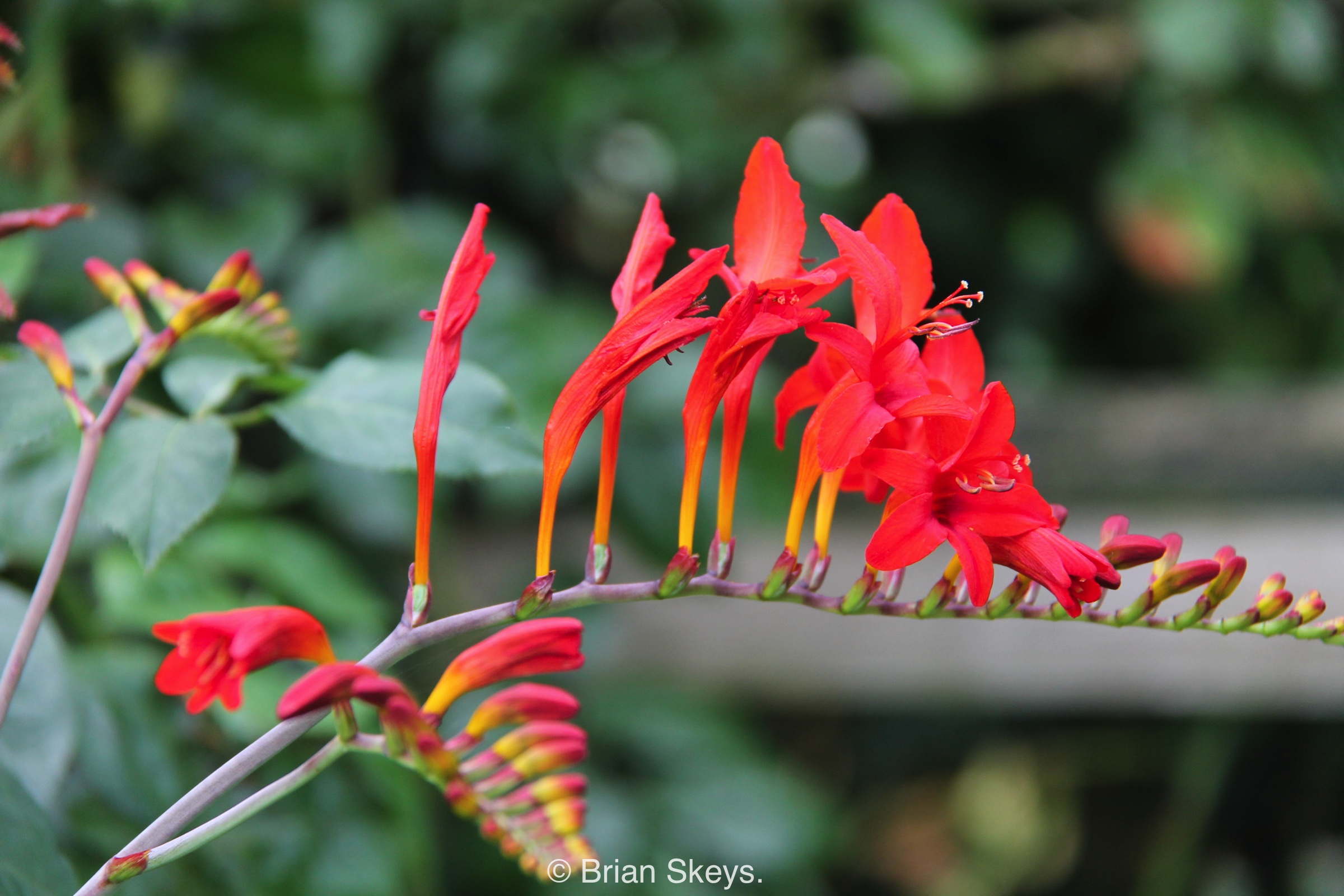 These are my five for July, please visit some of the other blogs which are posting their  favourite flowers to see what they have chosen. Which ones are yours?

You can read about its history along with details regarding visiting the garden on the website: Holford Trust

It was a beautiful spring day, the marquee on the lawn housed some interesting plant and garden related stalls.   I bought Chocolate and Flowers.

We had previously visited the gardens in the summer of 2015, these pictures are from then. 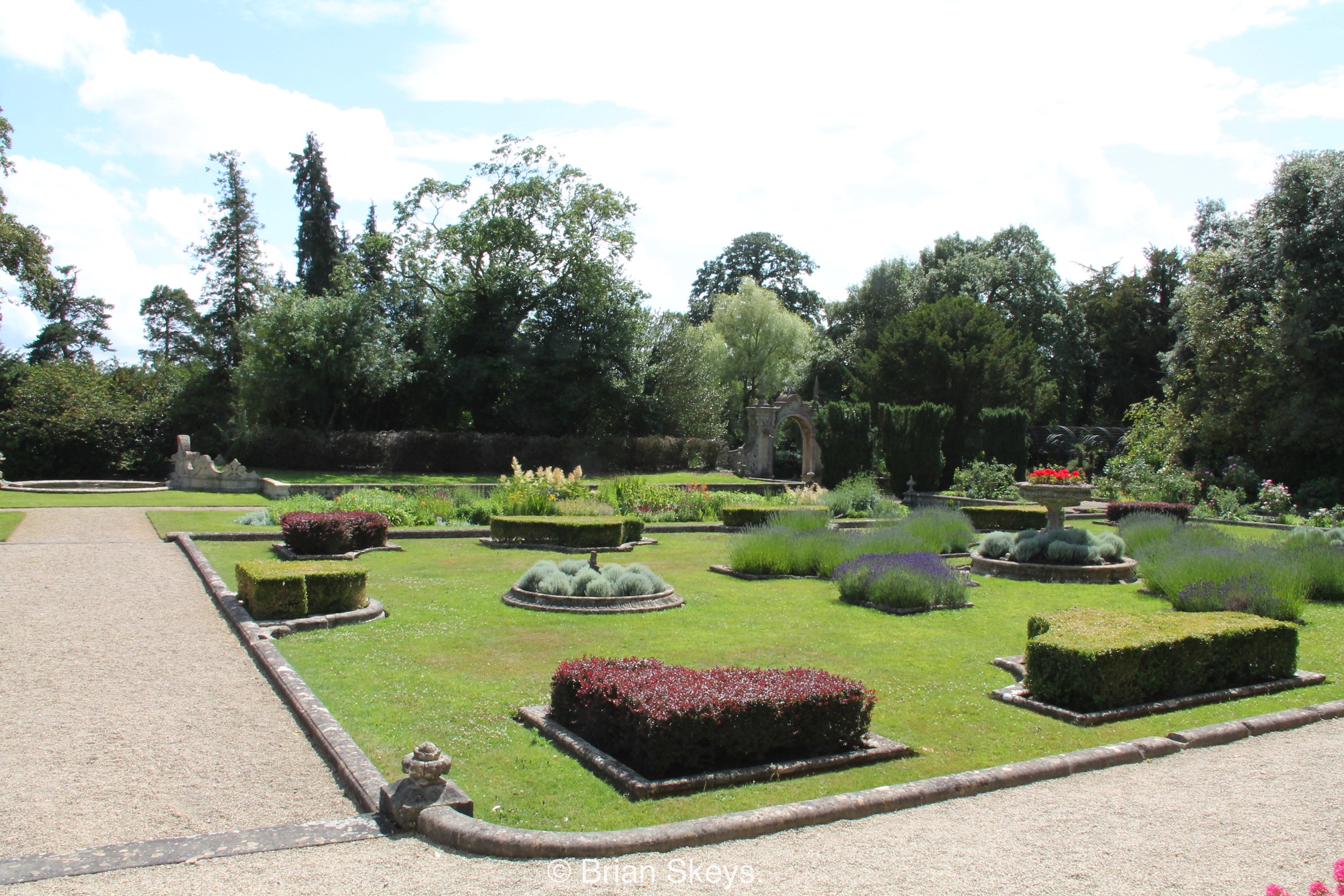 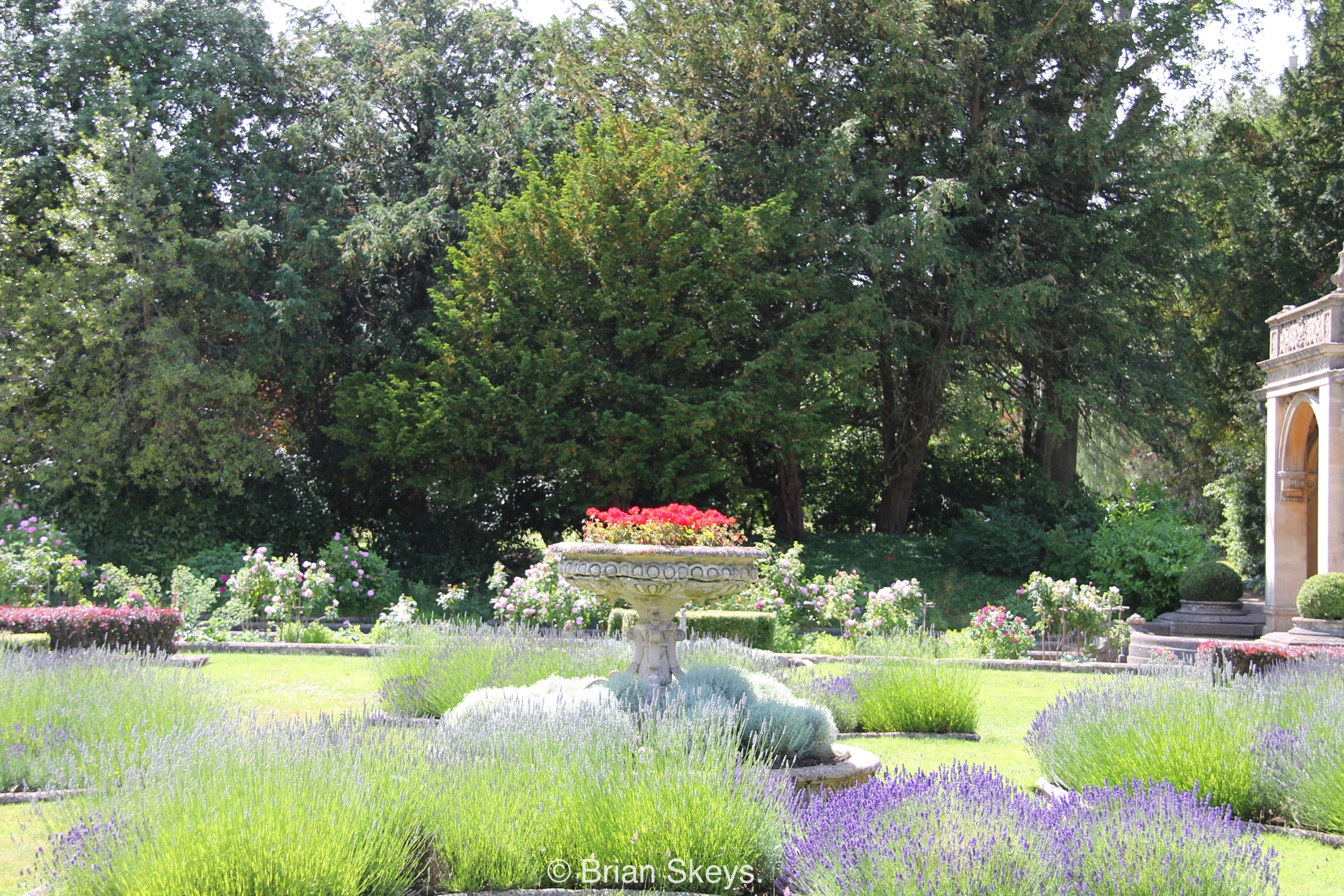 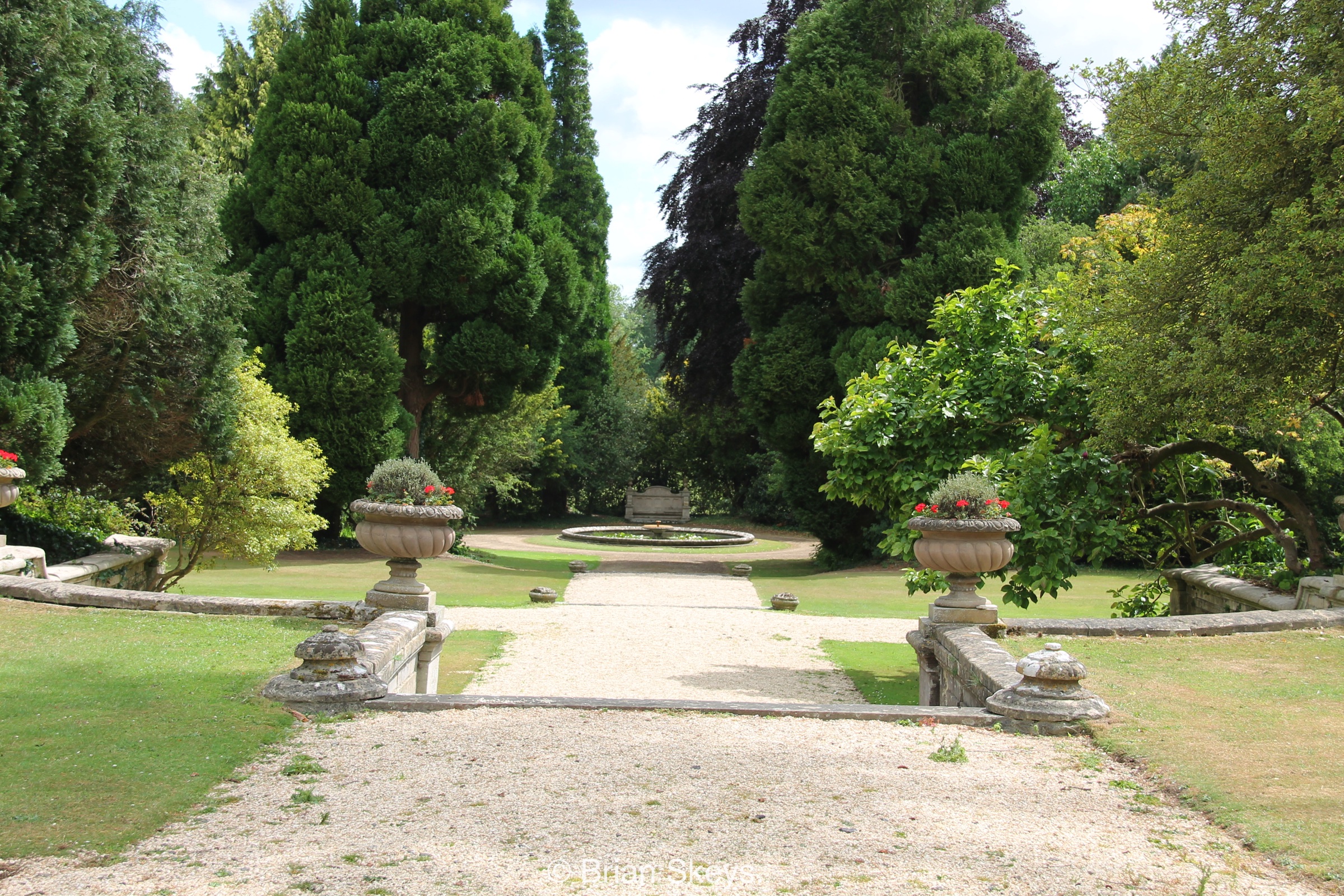 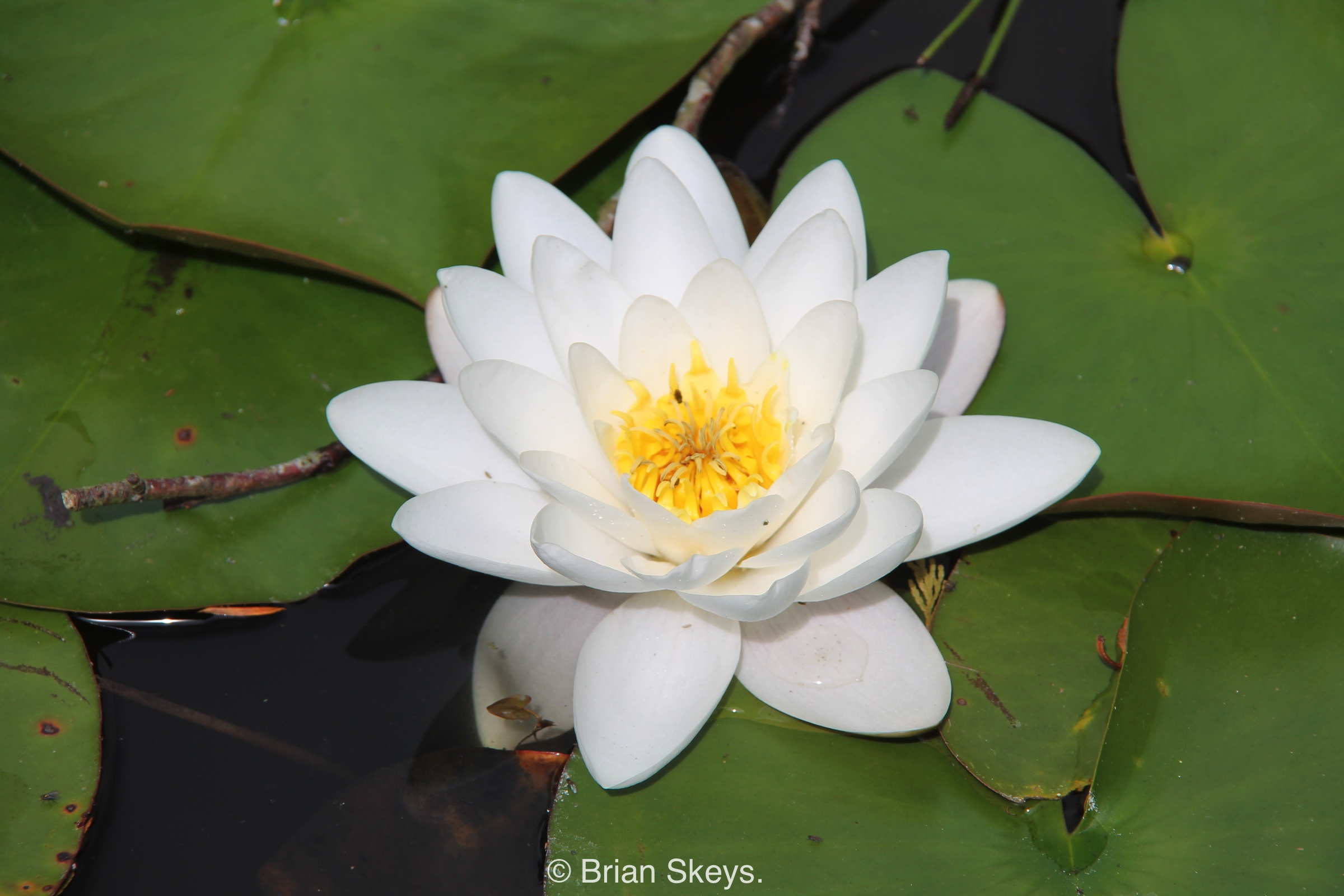 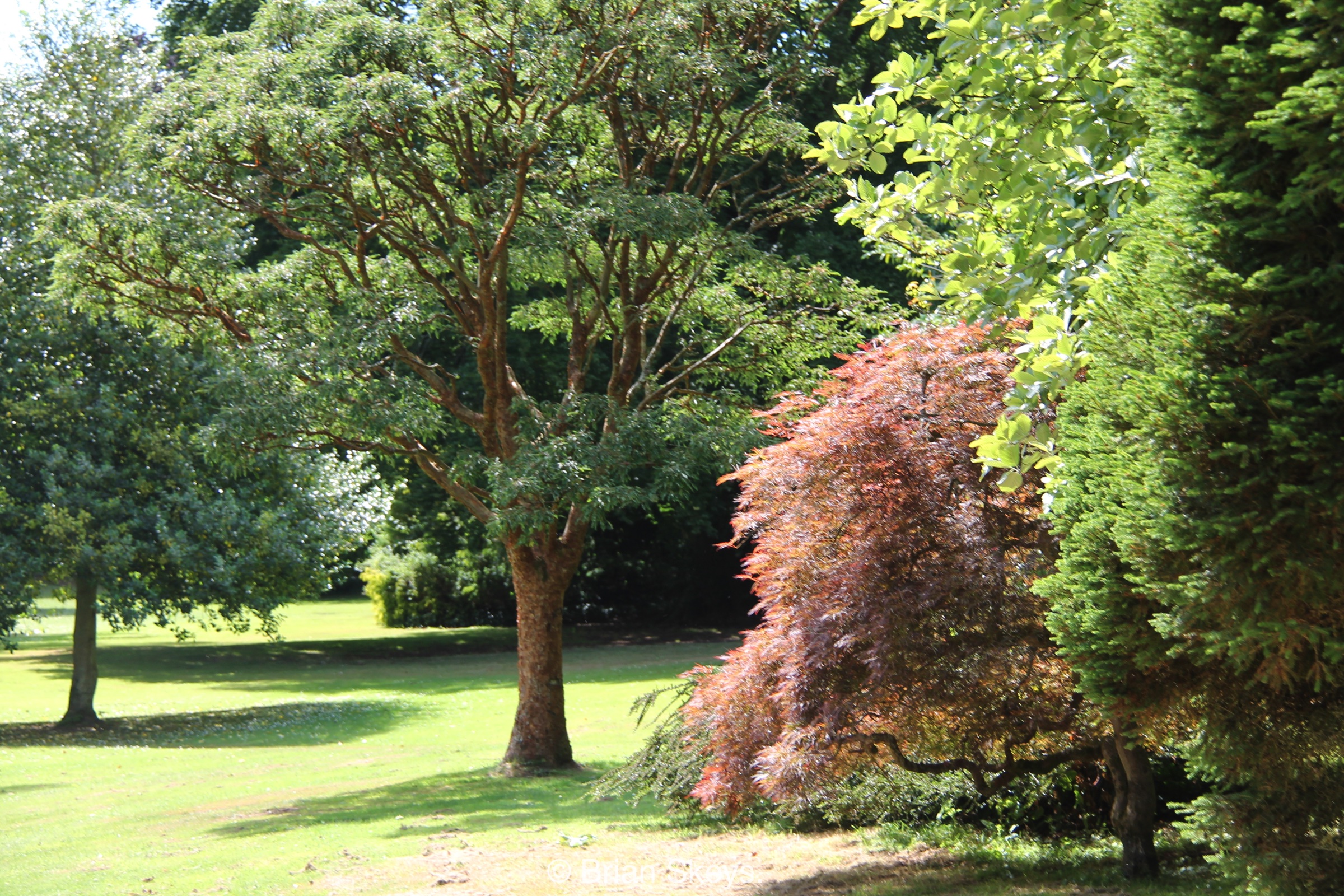 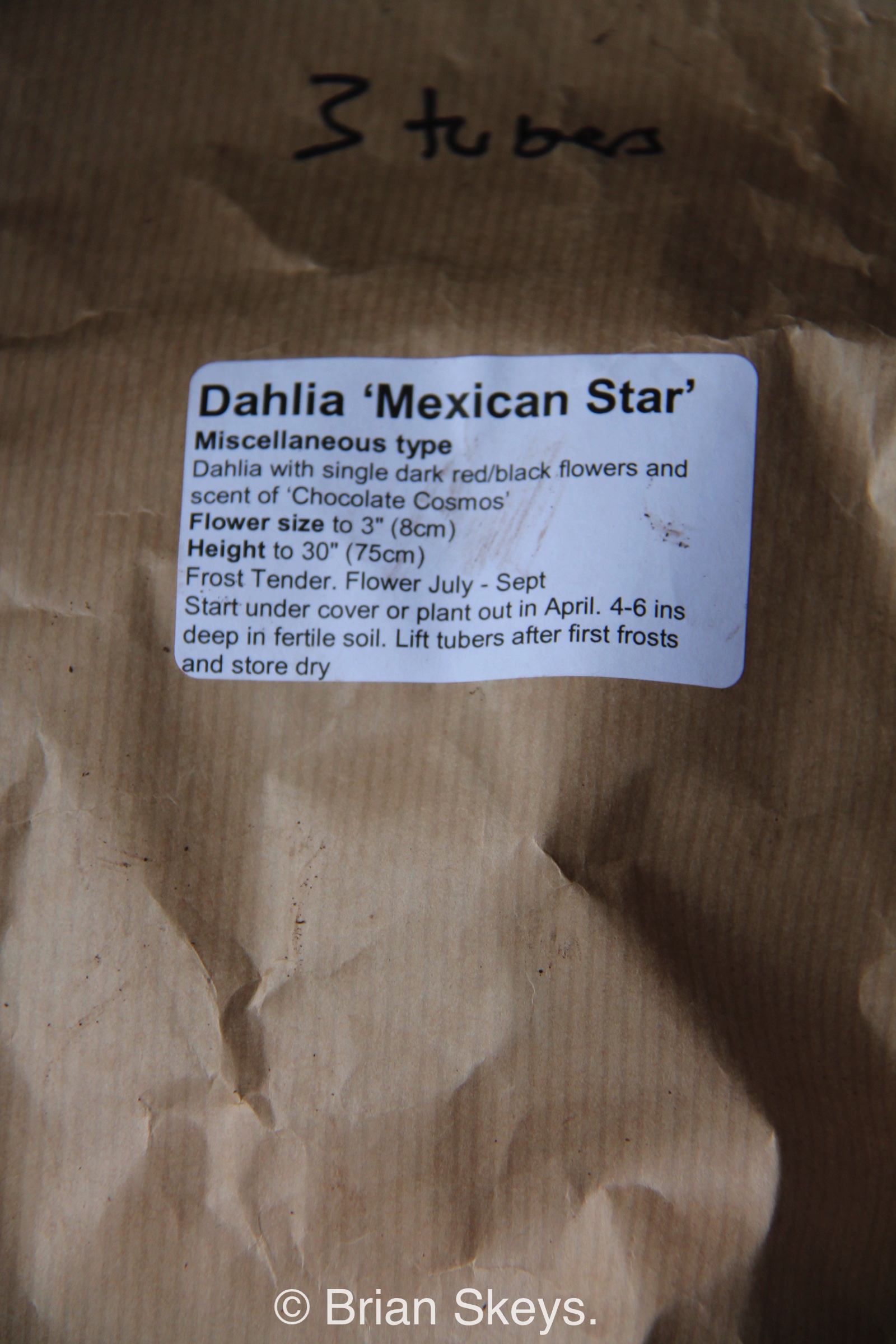 I am looking forward to seeing and smelling these!